Rotating Direction:
The rotating direction of the pump is clockwise as viewed from the end of drive.

The type of KWP pump is of single-stage centrifugal pump. It is high efficiency, non-clogging and back pull-out design which can allow the rotor to be removed from the pump casing without disturbing the piping or dismantling the casing. In this way, it is not only simplifying maintenance but also allows fast change of the impellers and wear plate at suction side, thereby permitting the pump to be rapidly modified to suit different operating conditions.

The KWP is from 40mm to 500mm according to outlet diameter.

Type KWP pump normally is suitable for delivering the neutral media (PH value is from 6 to 8). For the application of corrosive fluid and other special requirements, we could adopt with different material for this pump.

The type of KWP pump can deliver all kinds of sewage, clear water, seawater, bittern water, waste water and sludge so that it can be used in water supply plant, sewage treatment works, breweries, mines as well as the chemicals and construction industries.

Series of KWP non-clogging centrifugal pump is a new type high-efficiency, energy-saving non-clogging pump made by our workshops, under the license technology introduced from KSB Company.

1. The series KWP pump is supplied with 4 kinds of impeller for selection.

2. For clear water, the sewage and fluids containing solids and sludge which do not liberate gas.

water, sugar juices, and so on.

For fluids containing coarse solids liable to bunch or plait (such as long fiber admixtures, sticky

Particles and so on) and fluids containing air.

1. Gland seal: There are two kinds of design: standards and high-temperature.

The stuffing box of this type can be cooled in order to be suitable for the transporting duty in high temperature.

2. Mechanical seal: It should be used for the application where leakage is not allowed.

The rotating direction of the pump is clockwise as viewed from the end of drive.

In general, they are directly coupling driven. They are also indirectly coupled with belt; the range of drive ration is from 1:1 to 1:2. 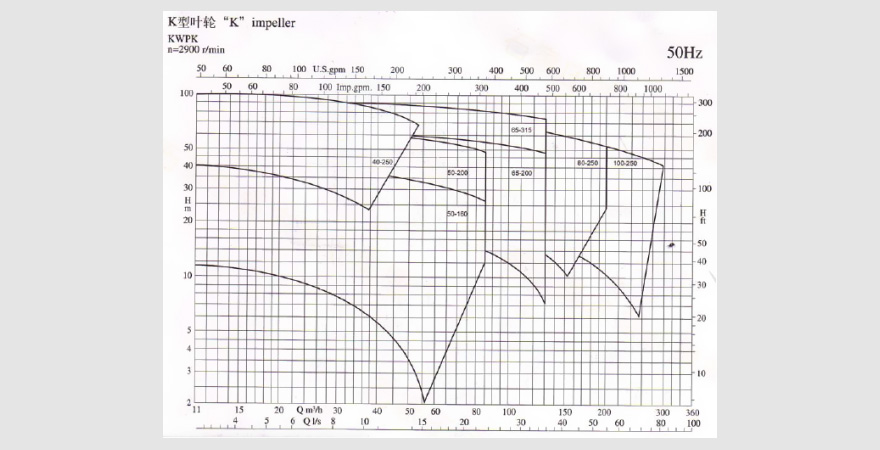